Our of curiosity, I decided to compare the actual fuel costs of driving an e-bicycle versus driving a car.

Using a power consumption formula I discovered at Ebikepursuits.com, and then plugged in the numbers for my e-bike’s battery.

Depreciation should be calculated

Our electric rates vary quite a bit based on the time of day, ranging from 10-45 cents per KwH, which means that the price for charge ranges from 4.5 cents to 20.25 cents.

But besides the fuel (electricity) cost, I also have to figure out the cost of the battery. If the manufacturer’s estimates are correct, I should get at least 600 charge cycles out of the battery, which costs $359, so the approximate pro-rated cost per charging cycle is 59.8 cents.

So added together, the cost for fuel and battery use would range from 65-80 cents per charing cycle, which would mean the e-bike has an approximate cost of 3.25-4 cents per mile.

The car I drive most often is a 2008 Kia Rondo (6 cyl) which average around 20 mpg (which makes for easy comparison purposes). At the present moment, the price of gas in Oklahoma City is around $2.79/gallon, which means my price per mile is 13.95 cents per mile.

Last week I bought an e-bike and so far I have been very pleased with this purchase.

The model I went with was the Ecotric Peace Dove, which was very affordable ($699) and so far has performed well. I had fairly low expectations for this bike (since it was 25% of the price of a higher end e-bike I test rode recently) but these expectations have been far exceeded. Battery life is good and it is very fast.

I am frankly convinced that e-bikes will be the primary transportation mode for young adults in the future — because in the sub-$1k range, a person is lucky to find a beater car and maybe pay for the tag on it, but with an e-bike you can buy a NEW ride. And then of course there’s the cost of insurance (none required for the e-bike) and fuel (no gas for the e-bike… I will have to see how much it affects our electric bill, but I don’t think it will be bad).

Just for fun, here’s my riding log so far:

20 years ago… I was a recent college graduate who was working as a pedicab driver in Austin, Texas, while taking a graduate journalism class at Texas State University in San Marcos (trying to figure out what I wanted to do next in my life).

On the morning of September 11, 2001, my dad called me on the phone and told me to turn on the TV. The next few hours were spent in shock, but after that I rode my bike to campus (because in those old days, I didn’t have internet access at home) and wrote an op-ed for the campus newspaper that called on our nation to not fall into reflexive vengeance and war.

The next few months were difficult. Financially, my income plummeted (because folks didn’t want to go to the bars at night in Austin during the weeks and months after 9-11, and hence I couldn’t get enough pedicab riders to make ends meet), but I also realized that my spiritual path wasn’t right for me (a realization that would take several more years to really become fleshed out and something I would take action upon). 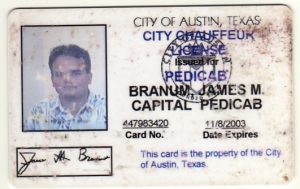 And most of all I was convinced that I wanted to pursue a life of activism (because I saw no point in anything else), which resulted in me applying to law schools with plans to start in the fall of 2002. And then… a lot happened after that, both in law school and after.

My minor life disruptions of that time now seem trivial in the light of what others were dealing with at the time (especially those in the military and those who would enlist and be deployed after 9-11), but I still can’t help but wonder “what if.”

What if our nation wasn’t attacked?

What if our nation hadn’t gone to war, not only in Afghanistan but shortly thereafter against Iraq?

We will never know.

Where was this teacher’s union and why weren’t they fighting for him? — I keep hearing stories like this one, and not hearing any kind of comment from a union rep in the press reporting. And while this may be an oversight of the reporter, I can’t help but wonder if it is something worse — the absence of the union in actually advocating for individual worker rights, particularly in light of illegal/unfair treatment of an individual worker due to their different in some way.

I strongly believe in the power of what unions could be, but am more and more disenchanted with their actual functioning of existing unions to fight for individual workers. I have in recent years encouraged several folks (who came to me for legal help with an employment situation) to reach out to their local union rep, and I’m sad to report that none of them got any help to speak of, with no real willingness by the union to even speak to management in a meaningful way about the problem.

I’m disheartened by this. I would love to hear some of you (especially in the labor movement) explain why my observations are not representative of any real trends — because I truly hope that what I’ve seen are uncommon situations.

We need unions, badly. But we need real agitating unions even more.